As part of this monographic exhibition "NOIR ECLAIR" (black lightening), he will feature, for the first time in this monument, an encounter between national heritage and contemporary art and will present works and installations specifically created for some outside areas, the Sainte-Chapelle and different floors of the fortress's keep.

"NOIR ECLAIR" is a contemporary art exhibition proposal specifically designed for the site.

A monographic exhibition of artist Aguirre Schwarz, known as ZEVS, well-known since the 1990s as a forerunner and leader of street art in France, it stages and experiments with the confrontation between national heritage and contemporary art through works and installations which, for the most part, resonate with the place and its history, and produce connections between the artist's work and the historical features of the monument.

The "NOIR ECLAIR" exhibition also, and especially, enables a unique and unprecedented approach to the artist's work and concerns, far exceeding the usual expressions of street art, both on a plastic and discursive level, exploring this particular and reactive language between urban art and contemporary art, which has been identifying his work around the world for nearly twenty years.

"NOIR ECLAIR" emerges as both a kind of retrospective (in it we find practices, reinterpreted, that he initiated in the past, such as clean graffiti, graffiti only visible in black light, liquidating logos, visual attacks, etc. that are now his signature), and as an original proposal, with new works specifically designed and produced for the exhibition. Photographs, installations, videos, sculptures and paintings offer a fairly comprehensive overview of the development of the artist's work.

The Sainte-Chapelle, some outdoor areas and all areas of the keep will be occupied. Most of the works will be produced specially for the exhibition, involving many partners and innovative technologies, while respecting the constraints inherent in the conservation of the monument.

ZEVS, the artist's pseudonym, is also, as we know, the one through whom comes the light in Greek mythology, and whose weapon produces lightning. Playing on this story the artist, who takes his name more from an RER A train than the Pantheon, follows the metaphor of chiaroscuro, shadow and light. Light is one of the major artistic areas of the artist, for which he has been working on the possibilities and effects for many years, from his "urban shadows" in the early 2000s to the paint with a fluo-luminescent pigment that reveals ultraviolet.

Flames, a burst of gold or silver, black or blinding light, electric, stroboscopic, flashed... the light spectrum is present everywhere in the exhibition.

From this sort of oxymoron – "Noir éclair" (black lightening) - ZEVS draws a set of formal proposals, thus exploring the contrasts of these colour fields.

But "NOIR ECLAIR" also lends itself to this game with words and images, to reflect on what the shadow and light – or more accurately, lightning in the night – symbolically signify, and that the figure of Leonardo da Vinci, in the initials LDV can be found here and there like a gimmick, embodying the possibility of a deconstruction – reconstruction of a man and a world, a new world... From the real renovation work to that of the ideas, of the "end" (see "The End" installation in the Sainte-Chapelle) from one world to the end of history, most of the works by ZEVS presented here, in their visual and semantic complexity, echo the precariousness of our world in our worship of the media and immediacy, our violence, yet without ever yielding to Manichaeism.

The exhibition is thus conceived as a subtle back and forth, a set of correspondences between the artist's concerns – of which the contentious dimension remains – and, on the one hand, the rebounds of history, its detours, the expression of its powers, of which Louis XIV – who will be liquidated here – embodies the epitome; and on the other hand, the long and complex history of the Château de Vincennes, with its successive abandonments and rebirths (Royal residence, prison, porcelain factory), then today, an essential part of French heritage.

"NOIR ECLAIR" thus participates in critical thinking that leads ZEVS on to the notion of power that the Château de Vincennes historically embodies, as a place of exercise of political power and later in its prison function. Some works will explicitly refer to the notion of power, both political but also and especially economic, such as trademarks and logos, against – and completely against – which the French artist has worked extensively.

The "NOIR ECLAIR" exhibition marks the highly anticipated return to France of ZEVS.

His presence at the Château de Vincennes for this first monographic exhibition of a contemporary artist at this site, constitutes a kind of renaissance for this national monument at the gates of Paris, and a thunderclap in the contemporary artistic landscape.

Marie Deparis-Yafil, co-curator of the exhibition 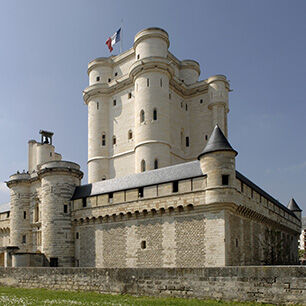