For the past fifteen years, the Pantheon presented considerable damage owing to several factors.

For the last fifteen years, the monument had presented significant damage that prompted several restoration projects led by the Regional Cultural Affairs Department for Ile de France. However, the damage proved to be more extensive than first thought.

The surveys, conducted from 2005 to 2011, found that an extensive restoration was required for the entire building, at an estimated cost of €100M over a period of 10 years.
The work carried out from November 2012 to November 2015 by the Centre des Monuments Nationaux, to the tune of €20M, accounted for the first phase of the restoration campaign. This phase focused on the upper section of the building: the dome, including the cupola and the lantern, supported by the tambour, and the capitals, especially impaired, of the colonnade.

The damage was caused by several factors: the ageing stone, poor watertightness, corroded metal parts inserted in the stonework and the poor distribution of pressure on the pillars and the arches of the transept crossing. 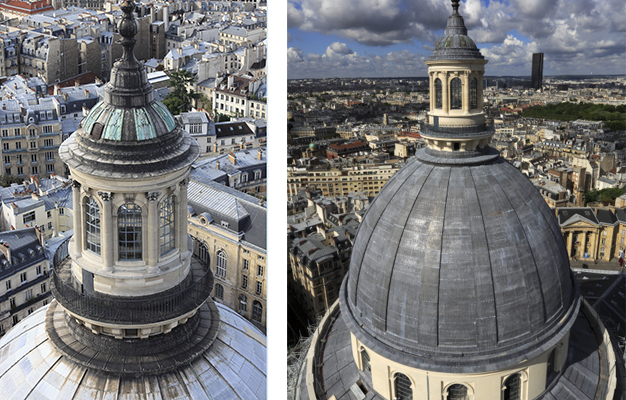 View of the Pantheon's lantern before and after restoration. - Photos: Gilles Codina/CMN

After a huge scaffolding tower covering the upper section of the monument was installed, the restoration work started on the lead coverings, the metal elements, the masonry, the sculptures and the joinery.

The lower part, the "stool", was supported by foundations 17 metres deep and rose 37 metres high. The crane towered above at 96 metres. The scaffold tower was self-supporting so as not to put even greater pressure on the structurally fragile monument.

Watch the film on installing the scaffolding:

Made of lead, copper and stone, the covers were restored to fix the problem of watertightness and preserve the interior masonry. The new covers for the dome were manufactured in the UK using a traditional sand casting technique.

Film on the covers coming soon.

Since most of the metal components were embedded in the stonework and therefore invisible, it was difficult to assess their condition. The visible parts were protected with a preventive treatment, while the parts that were too corroded were replaced and reinforcements put in their place.

View of the tie rods inside the dome, circular vault surrounding the base, Photo © Caroline Rose / Centre des monuments nationaux

The original joinery, made of wrought iron, was identically restored. The joinery made in the early 19th century was recreated based on the model of old joinery work. Watch the film on restoring the joinery

These parts were restored by paying maximum care to preserve the stone and the original joints. As the restoration progressed, initial estimates of the volume of stone needed was found to be below requirements. The restoration of the lantern is a good example of this.
The film on restoring the lantern is coming soon

The internal aspect of the sculptures were able to be saved, while their external aspects, more exposed to the elements, were mostly reproduced from scratch, requiring the input of both stone cutters and sculptors.
The film on restoring the sculptures coming soon

Come back soon to see the film Panthéonesque on the entire restoration project!