In 2010, to return the sculpted groups that decorate one of the world's biggest junctions to their former glory, the CMN commissioned the restoration to the Chief Architect of Historical Monuments, Etienne Poncelet.

Four sculpted groups adorn the abutments of the Arc de Triomphe. These masterpieces depict The Entry of Napoleon, The Departure of the Volunteers, The Conquest of Alexandria and The Battle of Austerlitz. The most famous of them, The Departure of the Volunteers, also known as La Marseillaise, was created by the Romantic sculptor François Rude in 1792.  The others were crafted by two other sculptors, Antoine Etex and Jean-Pierre Cortot.

In 2010, to return the sculpted groups that decorate one of the world's biggest junctions to their former glory, the CMN commissioned the restoration to the Chief Architect of Historical Monuments, Etienne Poncelet.

The main issue with the reliefs was that they were filthy, mainly down to pollution, which obscured the sculptures' fine detail. Furthermore, the damp-proofing protecting the external surface of the structure was 20 years old and needed replacing.

So the work consisted of cleaning the stone to remove the build-up of dirt and grime and carrying out a restoration of the relief sculptures. 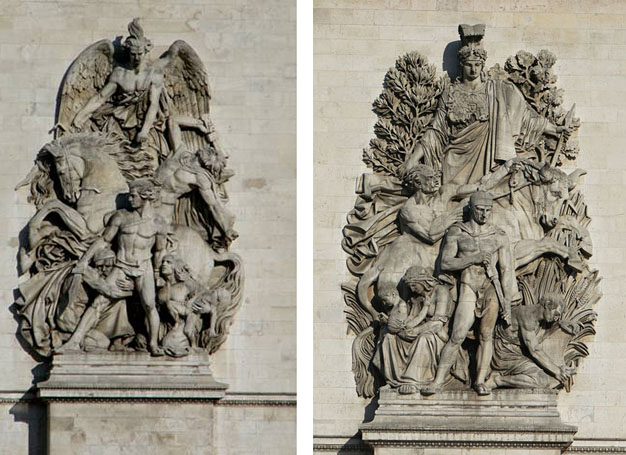 A WORD FROM THE ARCHITECT

What were the main challenges and constraints at this site?

More than 20 years after the Arc de Triomphe was cleaned for the occasion of the bicentenary of the French Revolution, we thought it was high time we brought the four sculpted groups adorning the four pillars at the Arc de Triomphe back to their original vigour. After a feasibility study was conducted, the restoration of these sculptures was green lit with one precise objective: to be ready for the anniversary planned for 18 June 2010, which we achieved. In the interests of quality and delivering on time, the operation was handled as one project awarded to a consortium of specialised companies. Tollis was chosen as the project manager. We had to work around the ceremonies, the tourists and the lighting of the Memorial Flame under the constant, albeit justifiable, pressure from the media interested in what we were doing. To preserve the harmony of the site, we paid particular attention to the building installations and the four protective structures displaying full-scale photographs of the actual sculptures and the CMN logos. 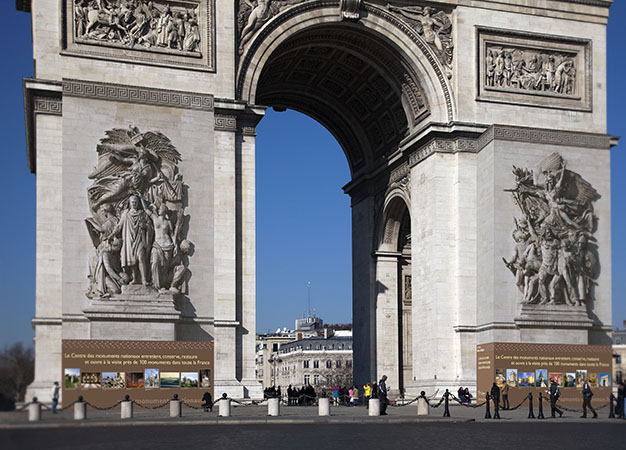 The architectural work involved an extensive restoration of the sculptures including the clean-up of certain sections covered in cement, the purge and replacement of a number of defective metal parts while preserving the harmony between the walls of the white Château-Landon pillars, containing damp proofing, and the sculpted Chérence stone, more golden in colour, which had retained traces of its original pink ochre covering.    Assisted by the advice from the Historic Monuments Research Laboratory (LRMH) and the experience of the restoration experts, we succeeded in restoring the work's original "symmetry", in the traditional sense of the word, including with regard to the bronze sword held by the genius of War and the trumpet, in a honey tone, blown by Pheme. 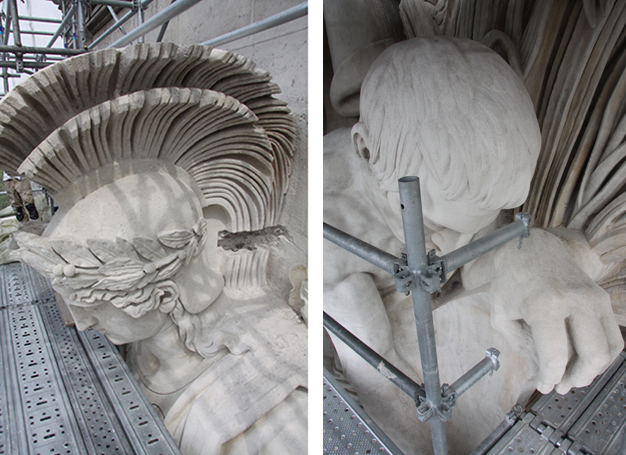 Cleaning with biocide, removing lichens using a hydraulic cutter and final touches by micro-abrasion were carried out following recommendations from the LRMH. This was done with ad-hoc restorations (of the reliefs in particular), which were supported by techniques adapted to the different types of stone (Château-Landon and Chérence). Finally, a patina was applied across the groups in the interests of harmonisation.

To guarantee the success of this restoration, the Chief Architect of Historic Monuments worked with a number of contractors, from stone restorers to lab engineers (at the LRM most notably).

The operation also received the valuable technical assistance of Kärcher (testing out the cleaning techniques for the different sorts of stone).

The sole sponsor for the operation was Dassault, which donated 800,000 euros.