As part of the ’Cluny 2010’ programme, launched to mark the 1,100th anniversary of the founding of the abbey, the CMN and the Regional Department for Cultural Affairs of Burgundy entrusted the restoration of the ancient abbey's small and large transepts to Frédéric Didier, Chief Architect of Historic Monuments.

The remains of the monastic church were difficult to make out thereby confusing our general understanding of the overall architecture of the Maior Ecclesia.

In the main transept, fully closed and covered and whose painted and sculpted décor was mostly preserved, it was necessary to restore the modified ancient parts and to return it to a 'baseline' condition approved by the scientific committee.

What remained of the small transept, burnt out and roofless, was in decay, primarily from being exposed to the elements, and needed to be strengthened.

Across all the elevations and vaults, the screeding and rendering added after the late 18th century was purged and replaced by materials corresponding to the ancient rendering and to the stucco that had been restored, just like the capitals, some of which still showed traces of their original polychrome decoration.

The large opening that connected the "sacristy" to the southern bay of the main transept was covered over and the original blind arch was restored to its former height.

The main transept before and after restoration - Photo: DR/CMN

This phase mostly consisted of restoring the transept to its original condition by reinforcing the few sculptural remains and repairing the facings of the masonry.

Both in the interests of conservation and to improve the intelligibility of the ruins, the roof of the southern bay was restored to its original barrel vault design using traditional materials and techniques.

Furthermore, in order to understand how the main transept linked to the side aisles, a 19th-century wall was taken down and previously torn down elements were restored, notably the arch that separated the narrow and wide side aisles.

In both the small and large transepts, the floor was entirely restored based on the most recent paving, laid down in the 18th century, the specifications of which were unearthed during excavations carried out in this part of the abbey in 1993. During this operation, the spaces were returned to their original ground level, making them perfectly accessible.

The restoration of the transepts was undertaken with the framework of the State/Regional Contract Plan that permitted the cooperation of several stakeholders: local authorities (the municipality, the general council and the regional council), ENSAM engineering school, the FNADT, the French Ministry of Culture, the EU, the CMN and several sponsors.

To guarantee the success of this restoration, the Chief Architect of Historic Monuments worked with a number of contractors, including bricklayers, stone cutters and sculptors. 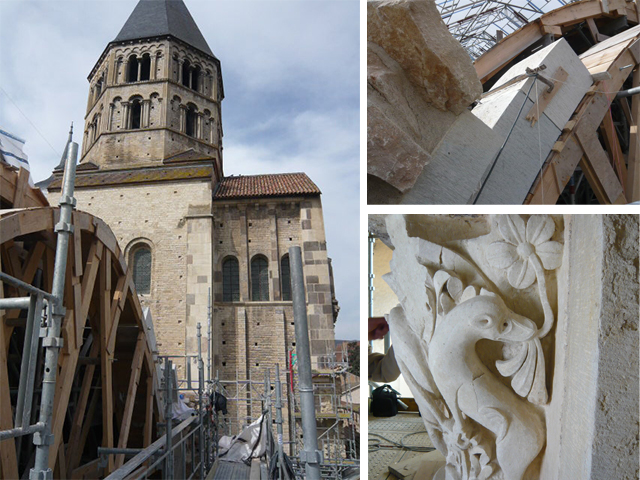